To everyone who stood up and helped with this crazy idea, I will not disappoint you. There is a larger purpose behind the mere building of this oven. It's going to cook a lot of friendships, and we won't release one carbon atom doing it. And this thing will be around awhile, the only moving parts are the wheels.

Colorado Bob
Posted by COLORADO BOB at 1:32 AM 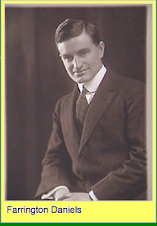 What This Part II

What This I
For 40 years the concept of solar ovens has rotated around the idea of bringing relief to a charcoal starved 3rd world. I read "Direct Use of the Sun's Energy" by Farrington Daniels in 1973. And it was 10 years old when I found it. It's the bible of solar power. Nothing has changed about the things Daniels laid out. Nothing. Materials science developed since 1964, but the things Daniels states about the sun, and the problems of capturing, and using that stored energy, it haven't changed a bit.

But back to the ovens. This spring I planted a lot of sweet corn with the idea I would cook it , and sell it on a stick. Always with the idea of using solar power to do it. So, I went looking for the state of the art in solar ovens. It's still stuck on all those charcoal burners in the 3rd world.

I'm serious, a fellow perfected that oven . It's called the Global Sun Oven . You can buy one for $289 bucks. Your purchase sends one somewhere into the 3rd world as well. And they're great, but I can't cook 100 ears of corn on one, all at one time. Which made me think , neither can someone in the 3rd world. No one has designed , and built a small solar oven like a backyard grill. With wheels on one end, and handles on the other, about 4 feet long.

So, that's what this is, this is the building of that oven, with that goal in mind. All the designs, plans and clips will be free to anyone who can use them. Whether, it's tamales in Mexico, lamb in Mecca, or corn on Buddy Holly Ave.

Support the Building of this Oven -